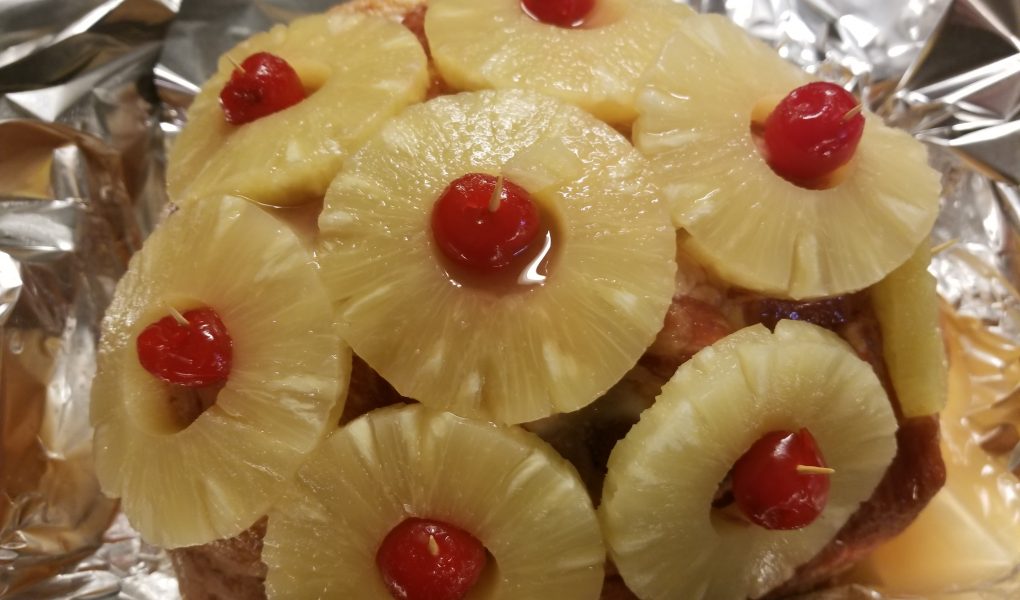 Being from the south, I never really questioned much about why we ate what we ate every new year’s day.  We always had some kind of pork – most years it looked much like the one in the photo did.  We loved some pineapple and cherry garnish on a ham, let me tell you – that was classy ham.  None of that poorly dressed, meeting the new year with a bad foot forward kind of ham for my family.  We also had greens – most of the time they were turnips with extra roots – that is how my Maw Maw liked them.  When we had turnips and roots, we also had lace cornbread – those small, fried on a cast iron skillet kind of hoe cakes that are really crispy around the edges.  Those are the best for adding some crunch to greens and roots.  When we had mustard or collard greens, regular old 2 inch thick cornbread was just fine – you needed the bulk to get the liquor from the bottom of the pot.  Be sure that the greens were seasoned with a chunk of the aforementioned ham during cooking, and there wasn’t a single instant pot or crock pot in sight.    We also had black eyed peas, rice, and something sweet.  There were always interchangeable sides that went along with the core group of recipes above, but those were ALWAYS on the table.

You see, I came from a family of share croppers on both sides.  We didn’t have money.  As a matter of fact, it wasn’t until middle school that I think my family moved solidly into middle class.  My parents married when my father already had four children – and full custody of them all…in the 1970’s.  Then surprise, shortly after Christmas of 1976…here comes #5 (and the favorite, I swear).  So, every year, we took as much luck as we could get into the new year with us.

What do each of the core dishes represent?

Pork – a pig has no neck, at least one that allows him to look behind himself.  Pork is for progress into the new year without looking back at the old.  The pig takes the lessons he learned with him and moves on.  I should have spent less time basting them and more time pondering that fact.  Maw Maw’s Holiday Ham recipe is super easy and is at the bottom of this post.

Greens – greens, as you can imagine, represent wealth and money.  Why doesn’t want a bite or two of those?

Black Eyed Peas – these are also lucky and symbolize coins.  Hopefully they will help us bring a rain of coins into the new year.  Dating back to the time after the civil war when little could be found to eat, these guys had enough time to sprout and bear before winter, providing food for cattle and people – hence the luck.

Rice – is also a symbol of good fortune.  My family wasn’t a big Hoppin’ John family, so instead of the liquidy black eyed peas and rice (or corn pone) soup, we would just eat it as a side.  It all seemed to work out in the cosmic mix.

Cornbread – cornbread symbolizes gold (and no good southerner is going to cook pork and greens without it, so it has to symbolize something).

The something sweet was simply because we couldn’t resist.  Holidays are a time of celebration and good will, and when family comes together to share a meal, what is better than finishing it off with a little something special?   Sharing that time as a small child working in my Maw Maw’s kitchen, playing with my cousins, and listening to the grown ups talk was more than most had.  I try to give that to my own kids to take them right into each new year with love and laughter to this day.

Prepare the ham by washing it thoroughly and setting it in the center of a foil lined baking pan.  Make sure that the edges of the foil are overlapping.  You are going to pull up the ends around the ham to seal in the moisture as it cooks.

Salt, pepper and season lightly with garlic.  Spear a cherry with a toothpick and use it to keep each pineapple slice in place.  Use all of your slices and put them on the front and sides if you have enough.  To give the  ham a slightly sweet flavor without having a praline crust on it, my grandmother would then sprinkle brown sugar over it to caramelize as the pineapple juice cooks out of the fruit.  Then pour the pineapple juice over the fruit and close your wrappings.

Alternately, pour about 2/3 bottle of coke over the pineapple rings (you don’t use the sugar in this version), wrap and bake.  If you start with a hickory smoked ham, all the better!

In either seasoning version, allow the ham to bake overnight at 250 degrees and do your best to keep errant family members from taking pinches out of the parts near the bone.  No guarantees you can do this though, the ham is slow cooked at a low temp, all night, making the meat fall away from the bone.

This is going to make for some amazing cold weather breakfasts over the next few weeks.  I will chop some and package just enough for four omelets, slice enough and package for ham biscuits, and portion it out depending on what dishes I might make from any leftovers.  There were rarely many leftovers from my childhood crew.

How to Meal Prep for Two Weeks Away 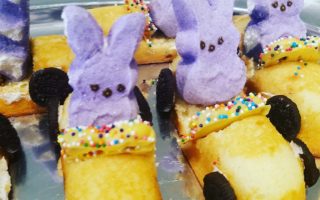