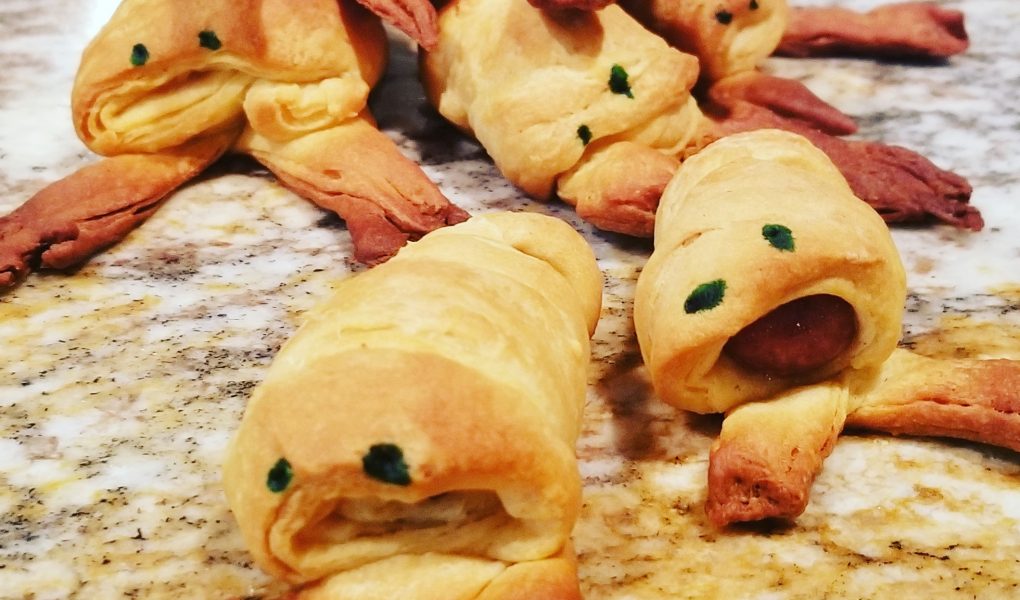 What kid doesn’t want to come home from school at 3:00 and immediately put on their costume and head out the door for some trick or treating?  I know I did at that age – it always seemed like it took forever for the sun to begin to set and trick or treaters to begin to emerge from their homes and slowly fill the neighborhood with laughter.  I have realized as I get older that as much fun as holidays were when I WAS as kid, they are twice as fun now that I HAVE kids. 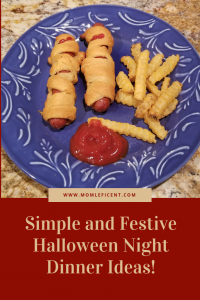 If possible, I like to make meals fun for the kids – this is when I slip in items that are “decorative” that they may not have tried on their own (think broccoli florettes as Frankenstein’s neck bolts) but love as a part of the larger dish.  These dinners have become legendary in our house and the kids look forward to seeing what I come up with to out do the previous year’s dish.  Here are some ideas that will get your kids ready for Halloween!

My kids will ask for mummy dogs any time of the year.  These are basically the same concept as the zombie pigs in blankets from above, just larger and a little less creepy.  No reaching arms or gaping mouths on these guys.  I do like to put some little eyes into the mummy dog but those can be done with ketchup or mustard after baking.  Leave your crescent roll dough rolled up and out of the can.  Slice ½ inch slices of dough from the end – sort of like you are cutting cookies from a roll of pre made cookie dough.  Unroll your mummy wrap and begin to spiral it around a hot dog or brat.  Leave some space so that the wrap can be spiraled back down, around the eyes, then down the body and criss-cross but not double layer too much.  Bake for 12 to 15 minutes at 350 degrees until the crescent rolls are done.  You can add eyes, smiles, or just serve with fries and apple slices if you like.  They are so cute!

This is actually a really easy dish!  I use a pre made pizza crust from a tube in the refrigerated isle of my grocery store.  The hard part is then done!  Roll out your dough and make ½ inch slices from the outer edge ¼ of the way into the square towards the center.  Leave about 4 inches at the top solid so that you can create a little face.  Fill the center with marinara, pepperoni, black olives, and anything else you love in a pizza or Stromboli.  Begin to weave the “bones” across the skeleton’s chest to create a rib cage look.  This could easily be converted into a mummy if you mess up, so have no fear and go for it!  Bake according to package instructions and enjoy!  Pictured are the beginnings of a stromboli and a finished breakfast mummy.  Fun!

Stuffed peppers are one of those dishes that you either love or hate.  I happen to be one of those people who dearly love them!  Unfortunately the kids and Papa Bear are not so keen on them.  They like the filling, but not the pepper.  These adorable little jack o lanterns are one way I can get them to eat the pepper!  To make this adorable dish, see the full post here!  This is basically a deconstructed casserole made of the stuffed pepper stuffing and thinly diced bell peppers.  Papa Bear doesn’t like large chunks of vegies in anything that could get in between him and the meat of the entrée.  I mean that literally – the man loves meat.  So, if I dice them thinly, I can get more vegies per bite into him.  Sneaky but true.  For this recipe, I saved one of my casseroles from being adequately cheesed and fully prepped for baking.  The stuffing is going to be thawed while I am at work on Halloween, then used to stuff the peppers. 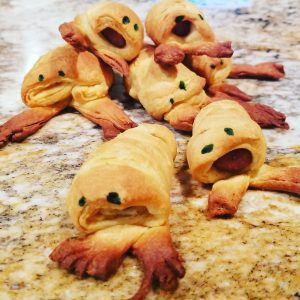 Looking for a unique, easy and impressive bite for a party or for Halloween night?  Here it is!  Trust me, these are going to get a reaction.  Your kids are either going to love them or completely be creeped out by them.  Mine love them (not as much as me), but still love them.  These are made in much the same way pigs in blankets are.  Start with a cocktail wiener and wrap small bits of croissant around the tiny piggy.  Double wrap the first band of dough so that you have room to pinch it a bit and stretch it out so that they have those gaping mouths.  Another 2 ½ to 3 inch band can be folded in a 45 degree angle to make the arms.  Make tiny slits in the ends to simulate fingers reaching.  Place the band your baking sheet then the zombie on top to look like he is crawling.  Dip the sharp end of a toothpick into green food color and poke eyes into the top of the zombie.  Bake for 12 to 15 minutes at 350 degrees or until golden brown.  The little dough arms tends to get a bit over brown, so don’t let that bother you. 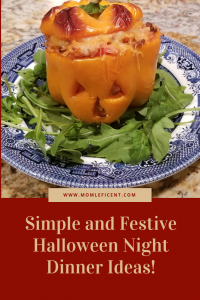 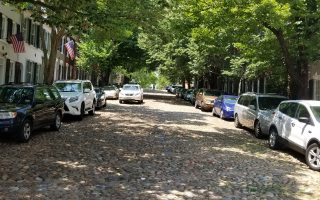 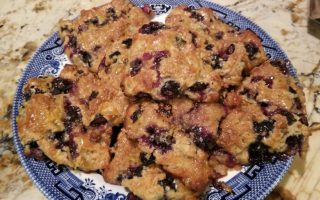 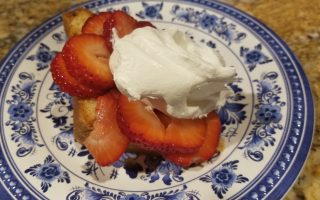 Mother’s Day In Lock Down – Easy Ideas to Honor Mom